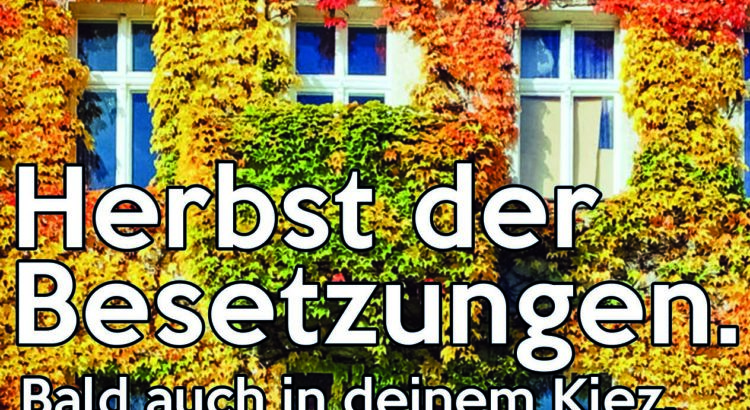 On the 20th May 2018, 10 houses were occupied in Berlin and the bordering city Potsdam. Despite positive feedback by neighbours and the public (aka media), all houses were violently evicted the same day. Despite promises concerning housing, the „left“ government had the police evict houses and beat up people. The protection of private property was yet again more valuable than the right to housing or the right to physical integrity. Nonetheless, the occupations were not just right but necessary. More than half of Berlin‘s population finds occupations legitimate. The need for space to housing and living however, remains.

That is why we take space!

Just like the countless people in Spain, Italy and Greece, who, due to the so called „crisis“ have no legal access to housing, while thousands of of flats and houses are empty, have occupied these. Just like refugees, who no longer want to accept to live in the fenced-in camps they were forced to live in. Just like all those homeless people who no longer accept their homelessness and take empty houses instead. Just like those people in the cities of Halle, Aachen, Stuttgart and elsewhere, who have occupied houses that are empty for capital venture, no longer accepting the lack of self-governed space and housing. Just like all those homeless people, who, out of necessary occupy on a daily bases with their tents and mattresses public space.

Instead of understanding housing as a basic need like water and food, housing is a commodity. Rent makes poor people poorer and rich people richer. The smallest amount of rent is put into the preservation of houses, the largest part of rent is simply profit at the hands of owners and investors. When housing and living space is handled like investments, tenants are reduced to a number in the book-keeping. Blind to the reality of our lives, all that counts is whether we bring owners and investors profit. Do we no longer produce profit, a simple scrap from their papers can mean for us the loss of our entire existence. But we are humans with needs, friends and a life, not a commodity one can play around with according to whether the book writes black or red numbers.

All houses in self-organisation

But the problem is not just houses that are empty for speculative reasons. The entire capitalist property market is the problem, in which profit rules over people‘s needs. Deutsche Wohnen, Akelius, ADO, Immeo, BWO, Padovicz, Mähren, CG, GMRE, Citec & Co ought to be expropriated without compensation. Communal housing companies such as Stadt & Land are far from being „social“ housing companys, instead acting equally under the logic of profit and “economic feasibility“. Intstead, all houses should be under cooperative and common control in the hands of those who house and uses them. Let us begin with that in those spaces in the city, that are empty. We need and alternative to the city of the rich.

#occupations are not an event, they are necessity.
This fall and always. In Berlin and everywhere. Until we no longer have to.

For a life free of landlords.
For a life in solidarity and freedom!